zoom
Methodist Church Kilkee
Robert Brown
zoom
Here is the photo of The Crook Memorial church in Kilkee around 1901.The quality isn't great but it is 120 years old. My mother told me the gentleman in the middle was her GF John Ronan. She lived in the house in Kilrush with him, until his death in 1934. The path doesn't look made up and possibly there are paving slabs to the left of the steps? Makes me think photo as building nearing completion. The stained glass windows can just be made out.
Marie Conroy

Opening of Crook Memorial Church in 1901.

The leaflet/flyer announcing the programme of arrangements for the opening and dedicatory services of the Crook Memorial Church, West End, Kilkee on Sunday 3oth June 1901 was a source of curiosity which begged the question ,who was the person to whom the church was dedicated, what was his relevance to Kilkee, what was his importance to the Methodist community and why it was necessary to have such a comprehensive programme for the opening of a small church in the town of Kilkee.

Kilkee had been growing in size throughout the early 1800s  when the bulk of the buildings now seen in the town were put in place.


The Catholic church, the convent, the old national school, the Church of Ireland were all in place before, the first Wesleyan chapel was opened in Albert Road, in 1853, in a building converted from a private house which is now the site of the Pantry restaurant. The  latter two buildings were built to cater for the increasing number of visitors to the town, of the non-Catholic persuasion,  and by the late 1800s, it had become clear that the chapel in Albert Road was not fit for purpose and could not accommodate the numbers of Methodists who were seasonal visitors to the resort.


Accordingly, the premises in Albert Road was sold in 1900 for the sum of £142  and arrangements were put in train for the construction of the new Church in Geraldine Place, in the west end.  As the flyer puts it, the church was built – at a cost of about £700 –not only as a memorial to a greatly beloved Minister, but also to supply suitable accommodation for the ever-increasing number of summer visitors and tourists to the premier watering-place of Ireland. 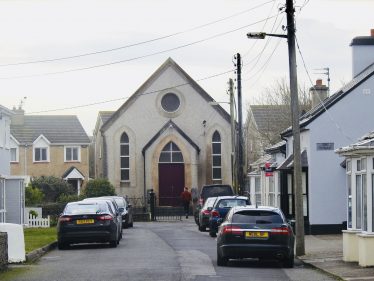 So, who was this “beloved Minister“? William Crook was born on lst November 1823 in Newtownbarry, Co Fermanagh and was the eldest son of William Crook and Jane Vipond, educated at Drogheda Grammar school, was married in 1855 and had 9 children, 3 girls and 6 boys, one of whom also became a Methodist minister (George V Crook) and another one of his sons, William became a political journalist, of whom we will hear more later.

William became a Methodist minister and  served in over 20 parishes and districts throughout Ireland between 1848 and 1897, and was living in Galway at the date of his death on 16th October 1897, aged 73.  He served for considerable periods of time in what is now Northern Ireland.

In 1866, he was appointed to bring greetings from the Methodist Conference in Ireland to the American  Methodist Church on the occasion of their centenary in 1866 and also revisited the USA on church business in 1881.

He wrote a book entitled  “Ireland and the Centenary of American Methodism” which has been described as one of the really important books on the history of Irish Methodism.  He had several other publications one of them being “The ancestry of the Wesleys, with special reference to their connection with Ireland“ and two others, which were of a controversial nature, namely

It appears to be the case that this publication was in fact addressed to his own son William who, having gone to London after some years teaching in Wesley College in Dublin had got involved in politics in England,had been an unsuccessful candidate for parliament in London and who had been involved generally in politics in the UK on behalf of the Liberal party, and who had spoken out  in opposition to his own fathers views on Home Rule, at the Protestant Home Rule Association in 19887. Undaunted by the opposition of his son to his views, William Crook senior published a further pamphlet on the matter in 1893

“The proposed Home Rule: Its relation to the cause of Christ in Ireland – a letter addressed to the Methodists of England and Scotland“

Apart from his strong views opposing Home Rule, William senior, jointly with a Dublin solicitor Theodore Cronhelm, founded the monthly Irish Methodist paper The Irish Evangelist and was co-founder of the Methodist Orphan Society.  He was a delegate to the 1881 First ecumenical Methodist Conference in London and in the last 25 years of his life, he took a leading part in the reorganization of Methodism in Ireland, in the adxministration of missionary affairs, in the introduction of lay representation in Conference and in the union of the two branches of Wesleyanism.

He served in Bedford Row in Limerick from 1883 to 1885 and was chairman of the Limerick District during his time there and was in fact chairman of many of the other districts in which he had served.  He may well have visited Kilkee during his time in Limerick but there is no record of his being in the town. He is commemorated in a tablet in the Embury Heck Memorial Methodist church in Ballingrane, Co Limerick  and is buried in the cemetery adjoining that church.

So, clearly, it was felt that when a new church was to be opened in 1901, it should be dedicated to his memory. It was clearly a major operation; one suspects that the flyer was likely to have been distributed mainly in the Limerick and Galway areas, with two days being set aside for the services, with several speakers arranged for the second day of services, on the 5th July 1901.

The proposed travelling arrangements, down the Shannon by boat from Limerick to Kilrush, via Tarbert,  and then a special train from Kilrush to Kilkee clearly anticipated a large number of participants at the services – with tea to be served on board the boat!  In passing, one cannot but admire the references to the special collection to pay off the cost of the construction of the church, the intention being that … ”after these services, no debt should remain“.

It is not known if members of the Crook family were present, or even invited,  to the services – his son Revd George V Crook is certainly not among the speakers but the reason for this is unknown. The church was in regular use until very recently.