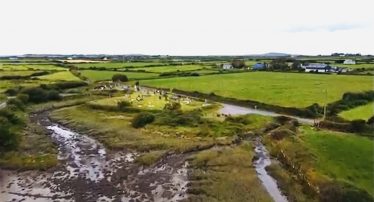 There is a burying ground in the south side of Querin Townland called Teampall-Meadhach or Meade’s Church. It is also know locally in Irish as Teampall-Micheal. The name implies there was a church with consecrated land and this is now a popular burying place, although it was for a long time a burial ground where only children and strangers would be buried because it was not believed to be the site of a Church or consecrated ground. There is also a holy well ,another reason it is consecrated land , which is still marked by a post in the Creek and called St Michael’s Well however it is no longer in use. Local legend tells the story of a young man with a severe limp been chased by the law who got his foot caught in the well on crossing the creek and on recovering found the limp had disappeared and he was able to get away with ease. 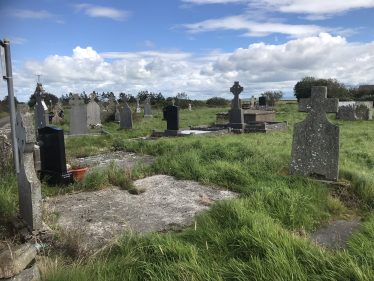 When the Querrin shore road was built in late 1800s some of the graves stones were moved and replaced in the present graveyard location without moving the actual graves. Local knowledge has it that there are many graves in field on opposite side of road to the graveyard that had their gravestones only removed and at the Mass to bless the graveyard each year this area is also blessed as if the priests know from each successive generation of priests the need to bless this area as well. 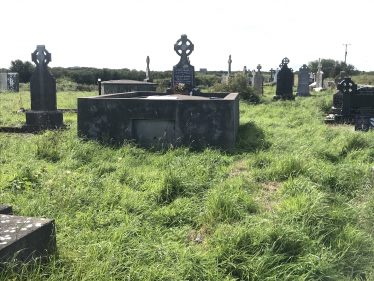 This burial place is traditionally believed to have derived its origin from the following circumstance.
After the Battle of the Boyne, the Irish Jacobite Army was dispersed and most lost their land and William’s soldiers of fortune were placed on the native Irish lands. Those soldiers and the proscribed native continued to harass and plunder each other for a long time, especially in the remote parts of the country. A Williamite soldier of the name of John Meade got a settlement somewhere about Miltown-Malbay, at the same time that one of Lord Clare’s Kearnes had located himself in the Wood of Querrin without the sanction or protection of the law as then established. This Kearne, who is believed to be one of the Mac Mahons, was in the habit of paying an occasional friendly visit to the cow-houses and sheepfolds of the new settlers, and Kearne favoured the aforesaid John Meade with a visit, on which occasion he took the liberty of carrying away with him several of the fattest oxen and sheep that could be found in that neighbourhood.
Battle of Querrin Wood: Meade, having discovered his loss, collected a party and warmly pursued the plunderer, who however, was able to gain his own residence before they were able to come up with him, but discovering that he was pursued he immediately collected as many of his neighbours as would join him, into his house, which he secured as well as he could and waited the coming up of the enemy.
They were not long in waiting for Meade’s party to come up and without delay commenced tearing down the house, which, of course, was not a well fortified one. They soon had it stripped of its thatch and small timber, and then, jumping down into the midst of the party below a terrible conflict ensued in which victory for a long time seemed doubtful. The leaders of both parties dealt dreadful blows around them, but, of the two, Meade was the bravest man.
The Kearne, seeing the havoc that Meade was making among his people, and finding him in close engagement with one of them, stole behind him and plunged a long skeen or knife into his side, at the same time dealing him such a blow as felled him to the earth. Meade, however, recovered his legs again and it is said that in his rage and writhing, he three times jumped off the floor, striking the soles of his shoes each time against a beam of timber which went across the house at the top of the wall, and then falling down, expired on the spot. The fate of the battle was then soon decided, for every man of Meade’s party was killed.
Templemeeagh( Querrin) Graveyard: The bodies were all carried to about a mile to the west, where they were buried on the brink of a little creek by the Shannon, where they remained without molestation or intrusion until within a comparatively recent period, when strangers, then still-born infants, then children, then the parents of those children, gradually were intruded on them and thus it has become now the burying place of almost all the families in its neighbourhood.
The two links below to Clare Library give you a map of graveyard and inscriptions on graves. With these links you will be guided to the grave you wish to visit.
http://www.clarelibrary.ie/…/templemeeagh_graveyard_map…
http://www.clarelibrary.ie/…/templemeeagh_graveyard…