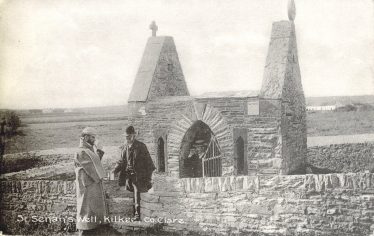 St Senan was bishop of Scattery Island in the 6th century and is revered in West Clare as the patron saint of the area. Many wells, stones, churches and other religious place are named after him.

The well in Kilkee called St Senan’s Well, is in the West End of the town and has been used as a drinking water supply going back to the 6th century. In 1854 a structure was built over the well to protect it from pollution because it was the main source of drinking water for the town of Kilkee. A concrete tank was built beside the well which captured the overflow and which was used for washing. The well is an essential part of the heritage of Kilkee.