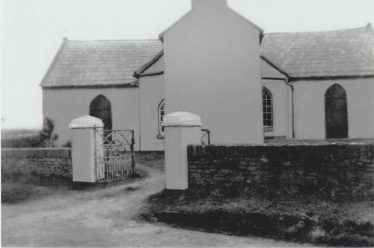 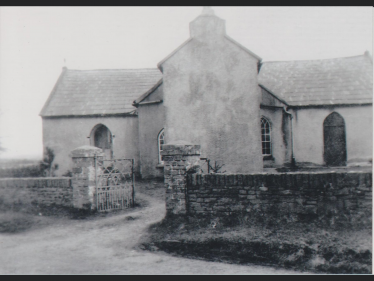 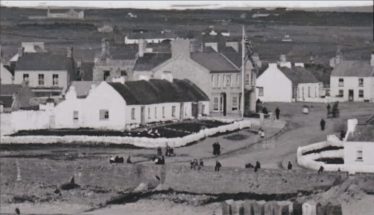 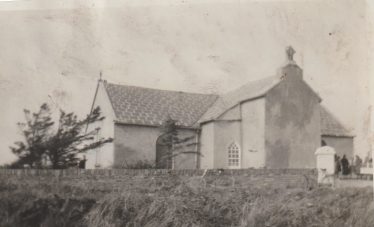 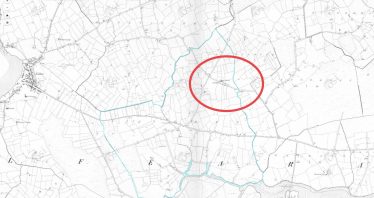 zoom
Shows site of the old Lisdeen Church which was well off the main road on left side as you leave Kilkee. As you can see from map a small community with houses existed ,all of which are now gone.
Curtesy of Heritage Maps 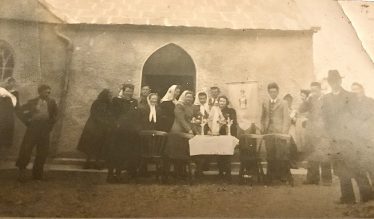 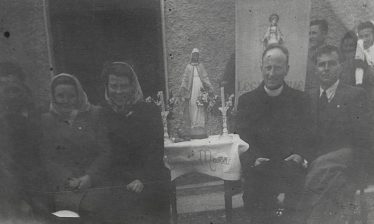 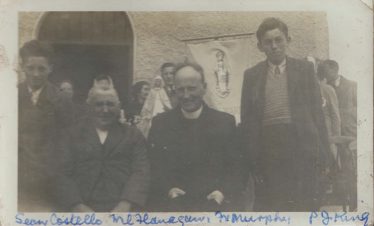 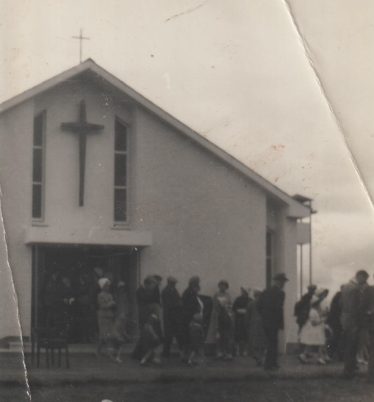 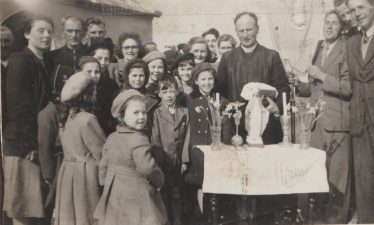 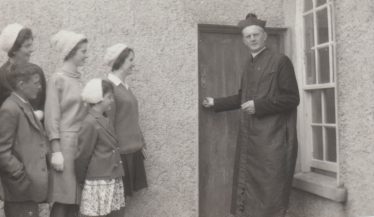 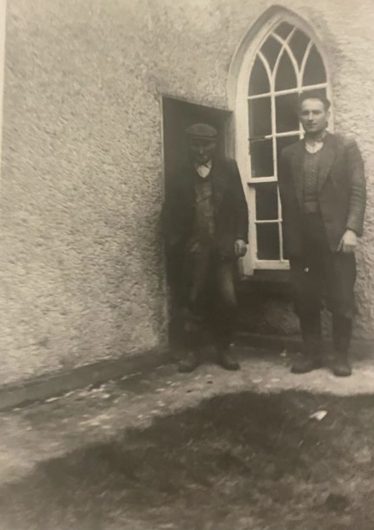 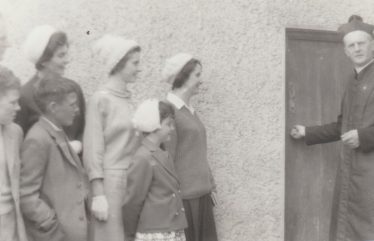 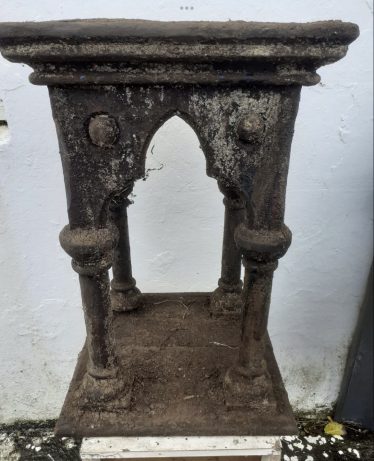 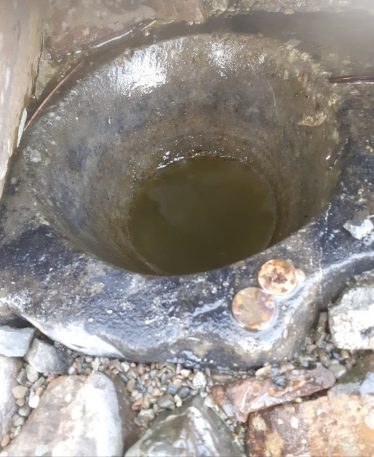 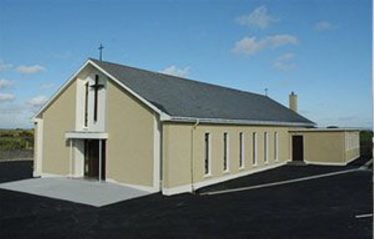 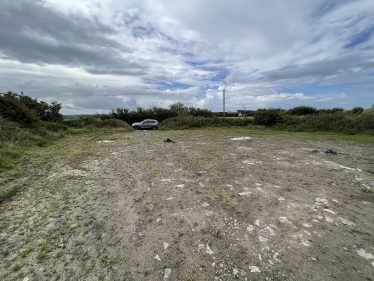 First Church : Records indicate the presence of a chapel at Lisdeen as early as 1760.                    It was called a Mass house and was a small thatched cabin. Mass House was the term used by Protestants for a Catholic Chapel. The term “church” was still applied exclusively to buildings for  Protestant worship.Almost without exception Catholic chapels were poorly constructed and practically devoid of furniture. Scarcity of money , the uncertainty created by short leases, and the need to remain discreetly in the shadows all contributed to the poor quality of the buildings.There was also a mass house at Corbally Cross until 1831.

Second Church: This was built sometime between 1806 and 1810 in Lisdeen on the same site as the earlier church, about 3km from the town of Kilkee and was reputed to be the oldest Roman Catholic Church in the Diocese of Killaloe until it was demolished in 1964 to be replaced by a new one at Garraun. At the time it was on the main road from Kilrush to Kilkee which entered Kilkee from the Doonbeg Road.

It was cruciform in shape, solidly built of stone with the windows in the three gables. It had two doors facing the road and one at the back. It was roofed mostly with bog deal. Tradition has it that the materials needed came by boat to the quay at Blackweir and thence taken by horse and cart to the site a mile or so north. The roof had large pointed flagstones. The space over the ceiling was supposed to be used as a refuge in penal times and in later years in the 1916-1923 trouble period.The first map shows the position of the old church which was much closer to Kilkee than its replacement at Garraun in 1964.

In 1827 there was two catholic chapels in the combined parishes of Kilfearagh and Killard ( Kilkee and Doonbeg today) : one in Lisdeen and and one in Doonbeg. in 1854 the combined parish was redivided into the parishes of Kilkee and Doonbeg.There was very little seating and it seemed not many people attended mass. The Lisdeen church was the parish church of the Parish of Kilferagh until the construction of Michael Comyn’s Catholic Church in Kilkee in 1834. After Catholic Emancipation in 1829 and the removal of the restrictions on leases it became easier to built catholic chapels. Their construction also got a boost from the prosperity in rural Ireland because of the agricultural boom during the Napoleonic Wars. The 1830s and the first half of the 1840s could be described as the golden age of chapel building in Ireland. Apart from the more elaborate buildings in some of the towns , all the chapels in the Killaloe Diocese were cruciform or rectangular plain buildings, solid and functional rather than decorative , designed to cater for large congregations with a minimum of furniture and interior fittings.

Up until 1834 there was no Catholic Church in Kilkee as the town of Kilkee was a recent development going from two houses in 1800 to hundreds by 1834. In 1834, after the opening of the new Catholic Church in Kilkee, it was reported that mass was celebrated once each Sunday and Holy Day both in Kilkee and Lisdeen. The average congregation at the time was 750 in Kilkee and 550 in Lisdeen. Not many people were in the habit of going to mass regularly.Evidence showed that children below their mid-teens did not go to mass. A girls first appearance at mass was when her parents were ready to receive marriage proposals for her. Furthermore , many families , adult children and their parents could not come together to mass on Sunday, but had alternate days in order to accommodate each other with the use of their clothes.

In the early 1960s a movement began to built a new Catholic Church to replace the one in Lisdeen. The main reasons given were lack of car parking space as cars were now replacing the old horse and cart and the need to replace the roof as the rafters were starting to rot at the wall plates and were a big danger as the flagstone slates were very heavy. There was a counter movement to repair and maintain the old chapel however they failed .So in1964 the church was demolished after a new church to replace it was built nearly a mile away further east on the main Kilkee to Kilrush road. The stone of the building was bought for £160 by Kevin Marrinan and could not be used in any building. The demolition crew was Padraig Haugh, John Lillis, S.Russell,   P.J.McMahon , Joe O’Mara , Dickie Linnane and Johnny Madigan. The picture with Father Murphy closing the door for the last time is very moving and sad.

Third Church:The new Church of Saint Flannan was build in 1963 at a cost of £12,000 in the town-land of Garraun.It is a small church of simple design, built to accommodate 240 persons. Altar, seating and other furnishings were transferred to it from the old church at Kilkee. The newly built churches at Kilkee and Garraun , both in the same Parish of Kilferagh, were  dedicated on the same day on 21st July 1963 by Bishop Joseph Rodgers. It was built by a contractor from Killaloe called Thomas Hayes. It was designed by John Thompson of Limerick. The first Mass was celebrated by Rev. Patrick Hogan C.C. who had the responsibility of erecting the two churches in the parish.

On Dec 18th 2011 a stained glass window depicting St. Flannan was dedicated by Bishop Kieran O’ Reilly. This window, which is in the Sanctuary area of the Church, was originally housed in Kilkee Church.

To mark the 50th Anniversary of the construction and dedication of the two parish Churches at Lisdeen( Garraun) and Kilkee a Remembrance Prayer Room was designed and opened in the former Mortuary Chapel area of Kilkee Church on Easter Sunday, 31st March 2013.

The first nine photos show the old church before it was knocked down.The third is taken from the West End, Kilkee , hence the poor quality, and the church can be seen in the distance in the top left-hand corner.The second last photo shows the site of the old Lisdeen Church as it is today.

Thanks to Louis King who presented a great talk on the above topic on 05/01/2023 in Kilkee and on the information he supplied to create this article along with his son Criostóir.