You are here: HomenextPlacesnextDoonaha Catholic Church 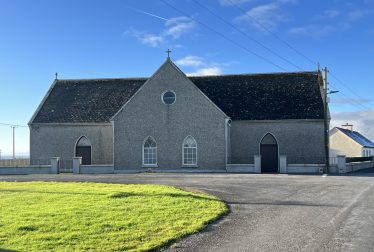 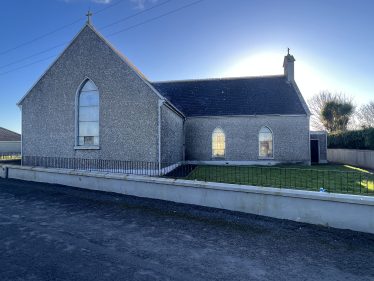 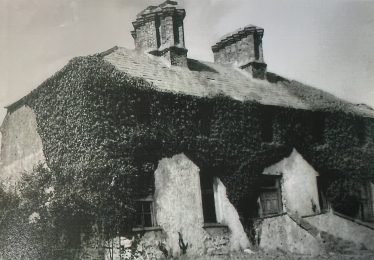 Batt Scanlan: ” The first Catholic Church built in Doonaha was thatched and was sited at the back of Mangan’s forge before 1803. Two men fought in it ,one been killed and the church was closed.”

According to Bishop Fogarty ,the Catholic Church built in Doonaha in 1803 is the oldest in the Diocese of Killaloe. Recent evidence suggests it is the second oldest. This church was named Saint Criodan’s Catholic Church.

In the porch is an old font which was dug up on the site when they were building the church.Tradition that father of Eugene O’Curry worked on its erection.

“M.Duggan P.P. of Doonaha in the County of Clare for himself and parishioners returns sincere thanks to the contractors of the Batteries on the lower Shannon for their kind and literal aid in erecting the bell of Doonaha Chapel and for the elegant belfry they generously constructed at their own expense.”

Between 1860 and 1880 the name of the church was changed to the Catholic Church of the Holy Spirit. There is no evidence that the old church from 1803 was knocked so the likelihood is there must have been renovations and extensions of the old building.

Description of church by the National Inventory of Architectural Heritage:

The story does not finish there. In the 1950s the whole roof had to be replaced at a great cost. A suggestion of building a new church was mooted and the imagination of the people was raised . A site in Querrin at a field in the south east corner of Querrin Cross was donated by the Lillis family. There was a major debate between the the communities of Querrin and Doonaha which thankfully came down on the side of saving the old church.

Back in the 1950s the alter boys of Doonaha and Querrin used to take turns to officiate the masses on a month on and off basis. Presumably to keep them fighting with each other !