You are here: HomenextPlacesnextHoly Wells of West Clare

If you draw  a line from Doonbeg bridge to Moyasta bridge and in the area from there to Loop Head you have 12 Holy wells clearly marked on the ordinance survey map discovery series H63 4th edition.

In early pagan times the people believed that the earth was the centre of the universe and the Gods existed in the centre of the earth so water that flowed from lakes, streams, etc. had little value. Water that sprang from the earth came from the Gods and had divine and healing qualities, therefore were places of worship. When St Patrick came to Ireland in 432 this practice was easier to incorporate into the Christian religion so he blessed the springs and called them Blessed Wells. Many churches and grave yards were constructed close to or around Holy Wells.

The popularity of visiting Holy Wells remained constant over the centuries. During the enforcement of Penal Laws in the 18th century when church and prayer houses were closed and the persecuted Irish people were forced to visit alternative places of worship so the remote Holy Wells were an escape from sectarian assault. Daniel O’Connell’s Catholic Emancipation saw greater religious freedom for Catholics in Ireland this resulted in a decline in the attendance at many Holy Wells in favour of churches.

The accepted term for Holy Well in the Irish language is either ‘Tobar Beannaithe (meaning Holy Well) or ‘Tobar Naofa’ (meaning Blessed Well). The surviving names of many wells are a direct translation into English from the Irish language after the pagan times. They were named after local Saints in West Clare example St. Senan, St. Martin and St. Cuam. It is thought there were thousands of Holy Wells in Ireland, natural springs, stone monuments, sea caves, etc. that have the power to cure illness through ritual and prayer.

The ritual is different for each well and  involves walking around and praying an odd number of times in the direction of the sun and drinking, bathing or removing the Holy Water on completion of the ‘Rounds’ and finally a small piece of clothing or rag from the sick person is placed on a tree or bush close to the well or left in a crevice on the well and held in place by a small stone.

The following is the information on the 12 local Holy Wells. 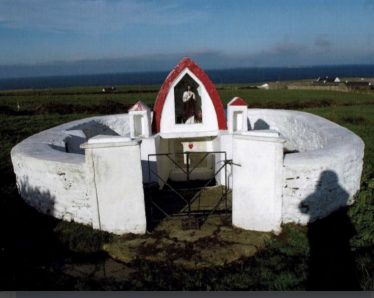 Our Saviour’s Well,Killard. The Irish name is Slanatoir An Domain – Saviour Of The World which is unique as it is the only well in the west of Ireland not called after a saint. It is situated beside the graveyard in Killard  overlooking the White Strand.The late Margaret Hastings (nee Normoyle) from Farrihy was born and reared only 200 yards from Killard holy well and she remembered when she was young how her father would take them to the well to say three decades of the rosary and involved 15 rounds of the well.After the 15 rounds of the well you could take and or sample the water and it was believed your prayers would be answered. 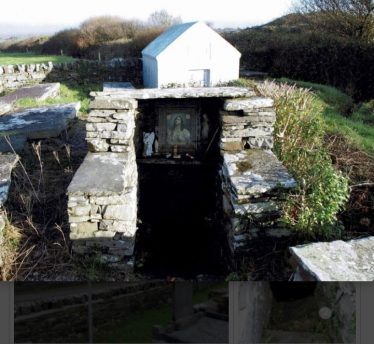 St. Senan’s Well, Kiltenane. This is very well preserved and looks the same today as it did 200 years ago. The rounds were performed by going around the graveyard 9 times and then around the well 9 times while praying in no particular pattern. It was famous in the local farming community for the prevention of slugs in vegetables, wire worms on potatoes. If the head of the family took the water and shook it in the 4 corners of your corn field it was expected to have a great crop. 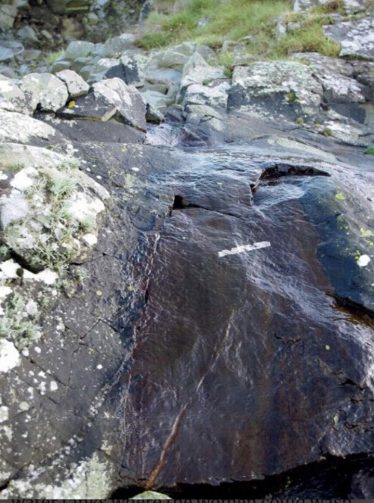 St. Brendan’s Well, Farrihy Shore. Unfortunately now this Well is in disarray but was once a famous place of worship for fishermen and farmers. Locals  would gather to clean and white wash the well each year and say a rosary when they finished. Each Curragh would have a small bottle of St Brendans water hung from the bow of the canoe to protect them out at sea and if the sea got rough they would hang the bottle on the outside of the boat tipping the waves to help calm the seas. Water from St Brendans well was used in every house in our area. Shaken over a sick animal or person going on a journey or even just the kids going off to school each morning. 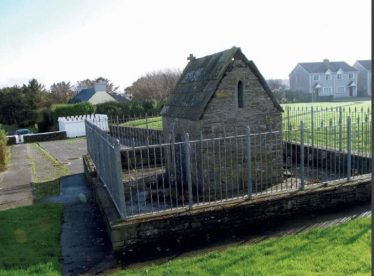 St,Senan’s Well, Kilkee. St Senans well is very well known and is located at the end of the well road that runs by the Victoria stream near the West End of Kilkee. Drinking water was sourced from this well with the overflow stored in water tanks where the women could wash clothes, etc.  Today it is unchanged with a protective rail around it and is visited by locals as it is still an important site in Kilkee’s history. 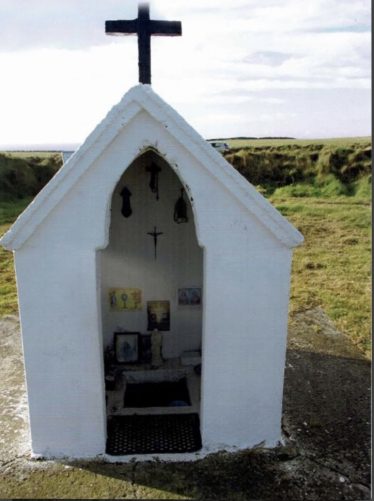 St. Kees Well,Shore Road,Kilkee. Legend has it that a holy hermit Saint Kees lived in the area and the monastic ruins on Bishops Island could have been his hermitage home. All the area around St Kees well during the 18th and 19th century was regarded as sacred ground. St Kees possibly preceded St Senan of the 6th century who is known as the patron saint of west Clare with his famous settlement in Scattery Island. Today St Kees well in the coast road is still visited by locals and tourists alike and many cures have been associated with the well. Also our town Kilkee gets its name from St Kees which its Irish is Cill Chaoi. 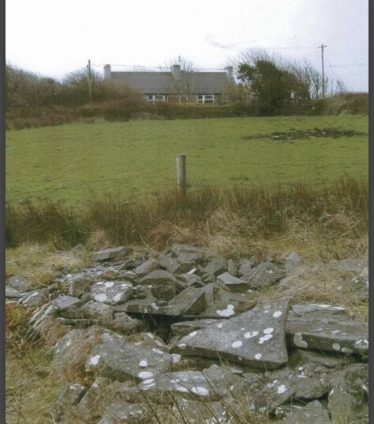 St. Fiachra’s Well, Kilferagh,Kilkee. St Fiachras well in Kilferragh is located 1 km from Kilferragh church and graveyard. Local history is not very clear but Francie Scanlon who lives next to the well, has no recollection of his parents talking about any religious visits related to the well. His only memory is one of his father telling the story of a severe drought in the early 1920s where the well was sunk from 2ft deep to 14ft and people came from Kilkee for their drinking water. 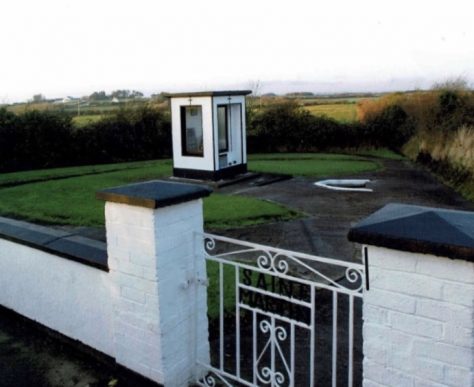 It is the most visited during the feast of St Martin in November. Rounds are walked in three circular footpaths, five rounds and a decade of the rosary during each round. Holy water from St Martins Well is in most homes in West Clare. An overflow trough of holy water is also adjacent to the well where offerings of money are thrown in which is now more commonly known as a wishing well.St Martin was born in 316AD and lived to 397 he followed his father’s footsteps as an officer in the Roman army. He found himself attracted to a new cult called Christianity and one very cold day he found a shivering beggar man on the road. He put his new religion into practice and cut his cloak in half and gave half of it to the grateful beggar. It is believed that God was so pleased he let the sun shine warmly for several days until the army replaced his cloak so today the few fine warm days in early November are called St Martins summer. His saintliness attracted a lot of attention and very soon he was designated Bishop of the Diocese of Tours. He was so alarmed by his new role that he hid in a barn to avoid the call but was given away by a noisy goose who attracted the churches pursuants to his hiding place. After his discovery the new bishop showed a vengeful streak by having the interfering goose killed and served for dinner establishing the tradition of eating goose on the feast of St Marin in 11th November. 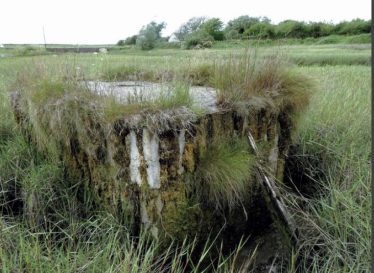 This is one of the most interesting wells in the circuit. Local folklore states that St Senan’s father who was a farmer from the Killimer area also had land along the Estuary in Tarmon. During a very dry summer streams had dried up and cattle were very short of water. While helping his dad round up the stock a young St Senan looked around the area and at a chosen spot pulled up long grass and cleaned around an area with his hands and water started to flow. Hundreds of years later it is still flowing. In early 1940 a local farmer Thomas Murray mounted a pump in his backyard and fitted a pipe from St Senans well to his yard but because it was twice daily tidal the water got contaminated. In order to combat this he built a concrete tank around the well 10ft long x 6ft wide x 6ft high and it supplied water for the rest of his life.Today as you can see from the photo it is quite crude but has lasted the test of time. The water still flows over the top of the tank and out to the estuary. If folklore is true and St Senan stood on this spot then it should also be highlighted. 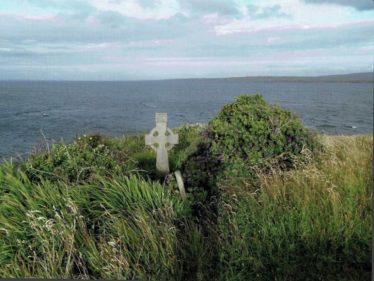 St. Credaun’s Well, Kilcredaun. Tober-Credaun was called after St Credaun, a disciple of St Senan and one of the most famous of the West Clare Wells in the last century. Pilgrims sometimes stayed the whole night with ailments from sore eyes to bad bones and deformities in children. Eugene O’Curry wrote in his 1838 Ordnance Survey Letter from Clare describing St Credaun’s Well as one of the most popular in Ireland with cures for eyes and limbs. Small stones and rags were used as offerings along with rosary beads and religious medals which were left on the blessed bush on the cliff top. Similar to the Well in Tullig it is tidal and as the tide goes out fresh water again begins to flow. 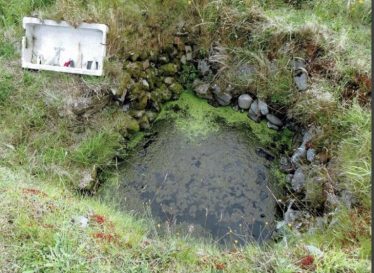 St.Cuan’s Well, Kiltrellig.This well is called Tober Cuam after St Cuam one of the nine saints associated with St Senan of Scattery, that is said to be buried nearby in Ross adjacent to the old church in that area. The well is on the right hand side of the road that leads to Kiltrellig graveyard. Its water is believed to have powers to cure eyesight and skin ailments although it is walled in, it is in decline and no longer visited for favours by locals. 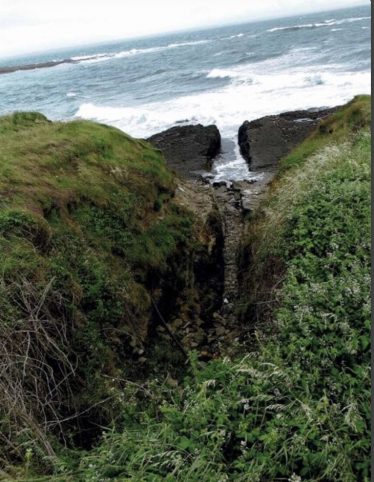 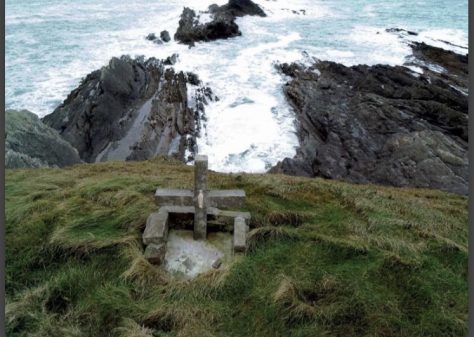 St.Leonard’s Well,Cross. This well is in the townland of Oughterard and is known locally as Tullig Well. It has a reputation to destroy wire worm, leather jacket and other parasites in crops. It was widely used by farmers near and far but with modernisation of agriculture it is almost impossible to find but for a cross on top of the cliff edge. The well is in a recess at the bottom of the cliff face that is tidal and as the tide goes out fresh water again begins to flow. The water from this well has to be used on nine rogation days and if you miss one day you must start from the beginning again.