This fish pond is located in the West End in Kilkee beside the Pollock Holes car park. Westropp, the famous antiquarian, in his reports on Kilkee in 1911-1913 describes the site as a ‘complex (earthwork) and of unusual interest which untold hosts of visitors pass without notice. At the foot of a long slope, close to the end of the great natural breakwater of Duggerna, we can see a large 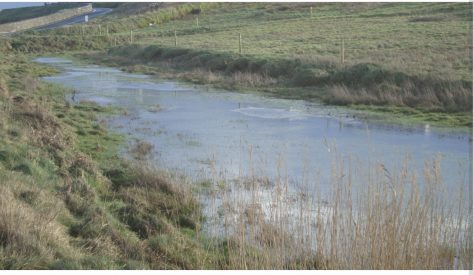 oblong space, fenced by high mounds and fed by streams.’

It is named after Isabella O’Brien who married Charles McDonnell, a local landlord, in 1718. They lived in Kilkee House which according to Westropp ‘was standing on a storm beaten plateau behind the angle of the West End’. Charles died in Kilkee in 1743 leaving his widow Isabella in Kilkee House and she died in 1788 but by 1816 Mason found the remains of the house imperceptible.

The dimensions of the surrounding mound of fish pond when measured by Westropp were 350 feet by 150 feet and estimated at six feet deep. The fish pond was constructed as a fish ‘pantry’ where freshly caught fish were kept alive until required for the table. It is a designated national monument as few of these fish ponds survive. Lady Isabella’s name lives on but in fact she wasn’t a titled Lady but was known as such by locals.