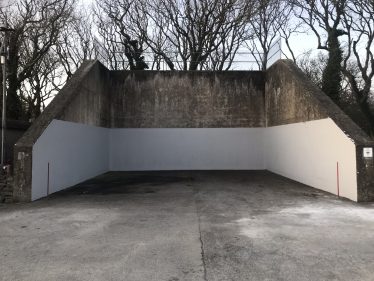 During the late 1800s and early 1900s there was a resurgence of Irish Nationalism and the hope of Home Rule was in sight. During this time an organisation called the Gaelic Athletic Association was formed in 1884 at the behest of a Michael Cusack , a Clare man.The G.A.A. included handball in the GAA Charter of 1884 as one of the sports to be promoted by the new Association and the GAA wrote the first rules for the modern game of handball.Handball had been played in Ireland for a long time and was exported all over the world by the emigrant Irish. The only other handball alley in the district was the gable wall of the Irish College in Carrigholt. The ball was made of rubber and one inch and a half in diameter a little bigger than a golf ball. The game was played by 2 players ‘singles’ or by 4 players ‘doubles’.

The first Handball Alley : In 1910 the first  Querrin Pier Handball Alley was built by the local people and if was to have two major improvements in 1945 and 1985 to become the structure it is today. This first attempt did not back into the wood but had its front wall on the boundary wall with two small side walls of 4 feet length backing out on to the pier and from here came out a further 14 feet. The road was now going around it !

Redesign of Handball Alley :By 1945 a local group decided it was time to improve the handball alley as they enjoyed the game so much . The first major problem was  its projection out on to the road and pier and this  was solved by my grandfather , Bill Counihan, who owned the wood behind the alley. He very generously gave the local group a section of the wood and part of  the alley was now backing into the wood and the present design of the alley was established. The next issue was the money to finance it and a local priest called Father Dick Lillis was the main driver in raising the cash. He organised concerts at Querrin School, Carrigholt, Kilkee and as far away as Doonbeg. The concert had the local talent and one act that was exceptional were the Troy sisters whose step dancing was ‘ out of this world ‘. 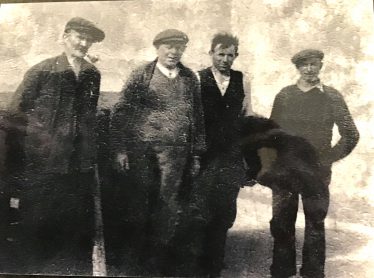 Tommy Power was payed to built it and he organised the volunteers as this truly was a community effort or meitheal. There was a large drop behind the original front wall of the alley  and this had to be infilled with rubble. The main helpers at the time were the three other Lillis brothers of Father Dick ,Jimmy ,Gerrard and Billy , Martin Hennessy did the mixing and he had 20 helpers collecting gravel by donkey and cart some of whom were Michael Power , Sonny Hennessy ,Bertie O’Donnell,  Marty O’Keefe ,Paddy and Bill McInerney, Mickey O’Dee and Fred Hennessy the brother of Martin.  My uncle Bill Counihan and had the job of drawing the seawater for the mix as he was only a young schoolboy. The gable of a barn belonging to John Brew was brought by donkey and cart to Querrin from Black weir by Bertie O’Donnell and still forms part of the framework that supports the back wall.
This new Alley then led to the hay day of the handball’s popularity in Querrin. In the 1940s handball was becoming a international game and the USA became involved and new rules emerged e.g. no more using your foot to return ball.  Every police department in the USA had a handball alley to keep their force fit. The big problem with the alley in Querrin was it had no back wall so could not be used in competition and when Querrin players played in a ‘proper ‘ handball alley they were not used to the back wall so were always at a disadvantage.
Thee most popular time to play was from around 12pm to 6pm on a Sunday afternoon. There could be up to 50 players. When you arrived you put your name up on the wall and you waited your turn. If you won you stayed on the court and you played up to 21 points. If you lost a point and you were serving you were ‘hand out‘ and only lost a point on your opposition serving and winning a point. The loser usually refereed the next game , Jack Galvin was the main referee for the big games. So one player could hold his place if he beat all comers and Tom McInerney described how his hand was swollen after one such session and he then had to home and milk the cow. At other times they played with 6 players with 3 on each side . The ladies used to come and watch also and in the Summer days you could add swimming off the pier into the mix. The younger players had to come first and get game before the adults arrived. A big problem they also had was loosing balls in the wood or over the pier into the water. Money was short and an hour could be spent looking for a ball. Collections of a few pence each were made to buy balls  in Nestor’s Sports Shop in Limerick and balls were bought by John Galvin who worked in Limerick. Certain players who lived local to the handball alley held the balls.
The players in this new era of the late 1940s and 1950’s were very talented and their names are still spoken locally with acclaim.Tommy and Ned Griffin, JJ Griffin ,Michael Power ,John Galvin , ,Paddy Nolan,  ,Tom and Willie McInerney,Paddy Nolan and his friends from Kilkee,  and the Hough’s and Harvey’s from Doonbeg .  There was one famous  match between Tommy Griffin and Paddy Nolan ,refereed by  Jack Galvin ,which went on for hours and was one of the best games ever seen.
The game of rackets was coming on the scene and was the new favoured  sport of the young. As a youngster in Querrin in late 1950s and 1960s I played racket ball however the handball alley players always had first call to it. Respect for the handball players rights to the alley was in built.
Improvements to Alley : In 1985 it was again repaired and the walls were strengthened. It was mainly done by Jimmy and Michael Galvin over  the long Easter weekend of that year along with other volunteers. The money was raised with a draw and Clare County Council also donated some funds. It was newly plastered inside and out.
Refurbishment: In November 2019 the handball alley was again given a facelift. It was cleaned and painted and new posts and mesh wiring put along the top wall to help stop ball been lost in wood. The money for this improvement was kindly donated by the Community Fund of Moneypoint Wind Farm.
zoom
Photo by Robert Brown
zoom
Tom McInerney, John Welsh, Billy Mcinerney and Tommy Hennessy, some of those who rebuilt the Handball Alley. Photo taken in Handball Alley in 1940s