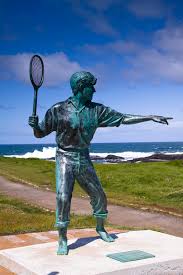 Sculpture of Harris
with racqet in hand
image John Williams

Richard (or Dickie as he was affectionately called in Kilkee) Harris was born in Limerick.

His father was a flour miller but the pace of modernisation left him exposed and he had to sell the mill. During all this time the Harris family stayed in Kilkee for the summer months and they were well known in the area.

Richard was a very fine sportsman but he had to give up a very promising career as a rugby player because he contracted tuberculosis.He spent two years in bed recovering from the disease.

The types of sports Dickie played in Kilkee, however, seemed to so help in combating the disease. He was a very good swimmer and regular swam across Kilkee Bay, a distance of 2.5Km. He won the annual Kilkee bay swim competition on a number of occasions and he then donated an annual perpetual cup for the winner of that competition which is still 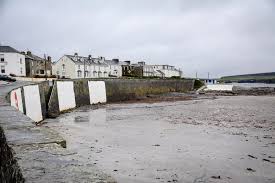 competed for. His other great sport was Kilkee racquets. This game,played on courts with racquets, is a cross between handball and squash and is peculiar to Kilkee. It is played against the high seawalls at the West End and goes back many generations, written records go back to 1930. The main competition, called the Tivoli Cup, was the major trophy in the game and Harris won it on four separate occasions.


Apart from his sporting prowess he was a very good actor and he developed his acting skills in Kilkee. In the 1940s and 50s (pre-TV days) many drama groups came to Kilkee to perform in the outdoor Amphitheatre. This was an area on the cliffs carved out of the rock by the Atlantic Ocean with an arena and tiered rock seating sculpted by the waves. Anyone who wanted, could go to the Amphitheatre and take part. Richard Harris was a great hit there 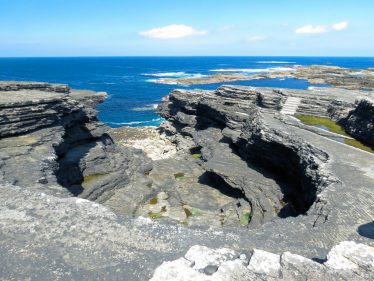 and he performed very regularly every year. It was no surprise to the people who had seen him perform that Richard  would one day become famous as a world class actor. His first big part was as a professional rugby league player in This Sporting Life. He went on to play major roles in many blockbusters such as Camelot, Julius Caesar, The Field, Gladiator,  A Man Called Horse and two Harry Potter films. He was a larger-than-life personality much to the chagrin of the many film directors who worked with him. 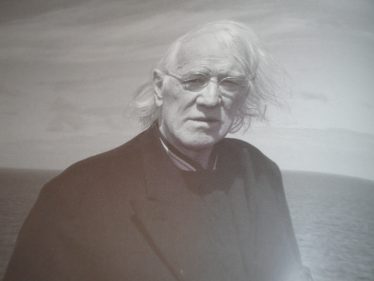 Harris in 2001 on his last visit to Kilkee image: Manuel di Lucia

All this time he had a base in Kilkee and returned frequently to his spiritual home. He returned for the last time in 2001 and sold his house. As his health was deteriorating he went to live in the Bahamas. He died there of Hodgkins Disease in October 2002.

“Wherever I went in life, whatever I was doing in some tropical location or ritzy hotel I would think of the beach or the promenade in Kilkee and yearn. Every man has a spiritual home; that is mine.”

The following is a comment by Daragh O Malley, a friend of Richard Harris on Kilkee Heritage facebook:

“When Richard Harris was dying in the intensive care unit at The Cromwell Hospital on the Brompton Road in London the room was private and you could only get to visit if you gave a secret password to the nurse at the desk. The password was “Kilkee”.

Richard Harris’s Kilkee stories really are endless. “The Billows”- a house opposite New Found Out – was owned by Harris for 20 odd years and yet he never spent a single night there. I was in Kilkee with him in August ’95 when we went there looking to buy what he called “a little lodge” as a gift for his granddaughter Ella. Harris had been on the dry for 17 years and when we got into Scotts I asked him ” What are you havin’ ? ” after a short pause he replied ” I’ll tell you what, I’ll have a fuckin’ pint of Guinness”. I said “Well, you better buy it yourself, Dick, ’cause I’m not going be accused of getting you back drinking”. Listen” he whispered ” Comin’ into Scotts and not havin’ a drink would be like goin’ into The Vatican and not sayin’ a fuckin’ prayer. Two pints of Guinness, Bill ! “”