You are here: HomenextPeoplenextThe White Sisters

Two regular visitors to the holiday resort of Kilkee after WWII stayed for 3 months each summer and continued their visits up until the early 60s.  These ladies fascinated the locals and holidaymaker alike due to their dress and unusual behaviours.  They dressed in a ‘nun-like’ habit which was different to what the locals were used to as it was all in white with a large head gear that protruded out over their faces.Some locals said while they did not converse with anyone but sometimes stopped young girls and advised them against a confined life in religion.  This made locals uneasy as they saw it as a threat to the catholic religion.They were biological sisters from Enniskillen Co Fermanagh and their names were Evelyn and Ann Dundas. 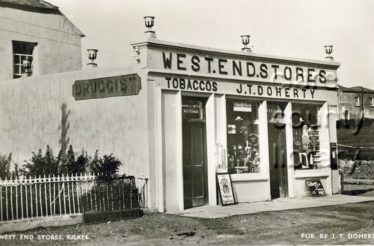 Sean Carney worked in Talty’s shop all his life and remembers them well.  He describes their accents as funny and hard to understand but said they were always very nice to him and always gave him a tip before leaving Kilkee.  He describes the all-white outfits as spotless with white shoes, gloves, shopping bags and one year they even had 2 small white dogs with them.  Sean also described how they loved bad weather and during a thunder storm would dance and sing outside under the storm with outstretched arms looking up to the thunder clouds even at night.

If the sea was rough they would stay in Kilkee for longer and the waves crashed over the pier and against the sea wall they would dance and sing in joyous manner.They had a brother who took them to Kilkee and collected them at the end of the season.  He also took care of any outstanding bills.