You are here: HomenextPeoplenextChé Guevara in Kilkee 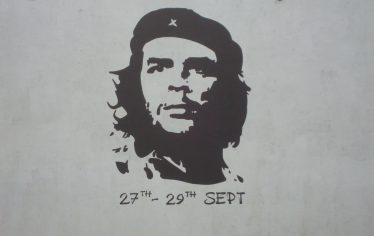 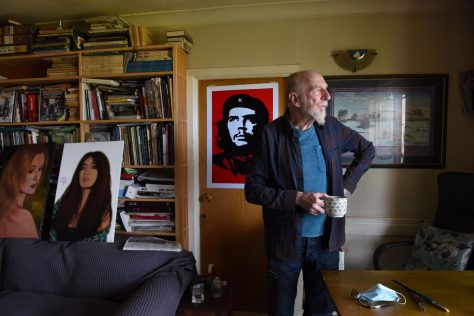 In the early years of transatlantic aviation aeroplanes did not have the capability to fly from the USA to Europe. Instead flights left the North American continent at Gander in Newfoundland having re-fuelled there. On the European side of the ocean Shannon Airport is as far as the planes could get to before re-fuelling for their onward journey. Without modern aviation instruments some planes which landed at Shannon were fog-bound and as there were few hotels in either Ennis or Limerick and plenty in Kilkee the passengers of the fog-bound plane were bussed to Kilkee to stay overnight. 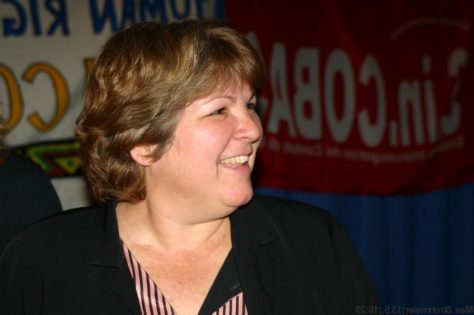 In 1961 a plane from Moscow to Cuba stopped for re-fuelling and among the passengers bussed to Kilkee was one Ernesto (Ché) Guevara. He and his fellow travellers stayed in the Strand Hotel but in their wandering around the popular seaside resort they went to the bar in the Royal Marine Hotel. Behind the counter of the bar was an art student, Jim Fitzpatrick, who recognised Guevara from photographs. As an art student his first reaction was to draw his important visitor. Today the iconic painting of Ché adorns the walls of bedrooms, tee shirts, and wherever left wing groups gather. An annual Cuban festival takes place in Kilkee every September in honour of Ché visit. At one such festival Aleida Guevara,Ché’s daughter, gave a public talk on what it is like to be the child of a very famous father. Aleida is a paediatrician in Havana’s Children’s Hospital.

Jim Fitzpatrick’s own story about meeting Ché in Kilkee

On a beautiful sunny morning in the summer of 1961, I was working in the Marine Hotel bar in Kilkee, Co Clare on my own. I was only a teenager. I travelled down to the seaside village to work in the hotel while on school holidays from Gormanstown College, Co Meath.

There was a guy in the bar called Sam, who locals would remember well because he was in there every day, a lovely man. I was chatting away to him. There were two other people in the bar, regulars who were talking to themselves. In walked these three, very interesting-looking men. All that was needed was Clint Eastwood-style saloon doors, because they came into the bar through swing doors at the side entrance to the hotel.

They had green-coloured, London Fog raincoats with epaulets – the thing on your shoulders that you put a backpack through. I recognised Che immediately. Who the other two guys were was a mystery. One guy was very curly-haired.

I said something like, ‘What brings you here?’. He laughed. I said, ‘I recognise you. I follow the Cuban revolution.’

I was a political animal when I was at school. The Cuban revolution was probably the most exciting thing that ever happened. For me, he was a world figure. We watched Pathé News and all the revolutionaries coming into Havana, sitting on top of tanks with their long hair and beards. People of my age idolised him.

We talked for a few minutes once he realised I knew who he was. His English was faltering, but he could make himself understood. The first thing he said was, ‘You know I’m Irish. My father was Guevara Lynch [a descendant of Patrick Lynch, who left Galway for Argentina in the 18th century].’ I was taken aback  because I didn’t know that at all. He said he was proud of his Irish ancestors; that the Irish brought down the British Empire

Guevara asked me for a suggestion as to what to drink. Obviously in Cuba, they drink rum, and I suggested rum. But he said no, he wanted an Irish drink. I recommended a whiskey. I said, ‘If you’re not used to it, I wouldn’t drink that quick. You need to put a mixer in it.’ He asked me what mixer and I said, ‘Ginger ale or water.’ And he took a glass of water, a glass of Power’s whiskey and he sipped it.

He sat down in a corner, chatting with his friends. They just had minerals to drink.