Jack O’Reilly was born in Kilkee in 1916. He was the son of Barney O’Reilly, a Royal Irish Constabulary (RIC) officer who was a member of the RIC squad which arrested Roger Casement on Banna Strand. Jack went to school in Kilkee and Kilrush and after his Leaving Certificate he joined the Irish Civil Service where he was stationed in Rosslare as a member of the Excise Division. After eighteen months he got tired of the life in the civic service and he resigned and decided to enter a monastery. He lasted less than a month there after which he went to London where he is reputed to have taken up numerous jobs from gardener, door to door salesman, barman, hotel porter and an Electrolux salesman.

Once again he got itchy feet and tired of London. He headed for Jersey where he worked as a farm labourer. When the authorities evacuated British citizens because of the threatened German invasion O’Reilly refused to go because he was afraid he might be called up for the army. He continued working as a farm labourer but he got friendly with a German officer who was keen to learn English. O’Reilly was put in charge of a canteen and was responsible for issuing rations. All the while he ingratiated himself with senior German officers and had discusions with them about forming an ‘Irish Brigade’ among many Irish in the German POW camps.

He was taken to Germany and his recruitment drive did not appear to be successful because he next surfaced in a Ministry of Propaganda radio station Irland-Redation at Rundfunkhaus in Berlin using the alias Pat OBrien. The programmes were anti-British propaganda aimed at Irish listeners and there he may have met Francis Stuart, Frank Ryan and Lord Haw-Haw. Once again O’Reilly grew restless and he approached Abwher the German intelligence agency and he was taken on and sent to Bremen to train for a mission in Northern Ireland. 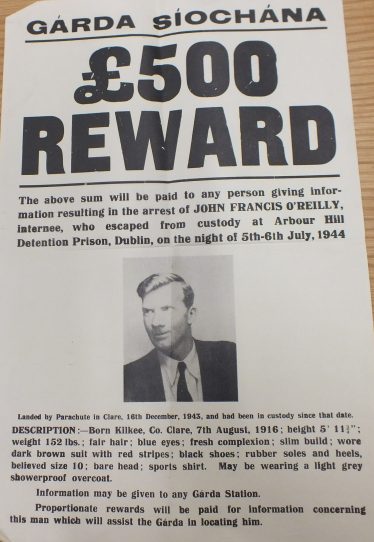 With his traing completed Jack OReilly was flown to Ireland by a Heinkell bomber in December 1943, He was dropped by parachute on Moveen hill on the southern side but just outside Kilkee. He had a colleague, John Kenny on the plane but he was dropped in Lisnanaghan a few miles to the north of the town. Having buried his parachute OReilly gave his heavy suitcase to Collins a farmer who lived close by to where he landed. O Reilly was arrested within a few hours and after questioning by the Irish police in which he admitted having a German radio transmitter and a quantity of sterling (thought to be fake) was place in detention in Arbour Hill Prison. In July 1944 he escaped from Arbour Hill and made his way back to Kilkee. He was arrested within three hours of his arrival there and he was returned to Arbour Hill. The £500 reward for information leading to his capture which had been just issued was claimed by his father, Bernard (Barney) O’Reilly. There was correspondence between the Department of Justice and the Garda authorities regarding the propriety of paying  the reward to the father but it was eventually paid. Barney told friends in Kilkee that he ‘turned in’ his own son because he would be safer in prison. Jack was released from prison at the end of the Second World War.

Jack bought the Esplanade Hotel in Parkgate Street in Dublin in October 1945 (there is still much debate about his source of funds). That business did not last long, O’Reilly once again got itchy feet and applied for a visa to go to the USA but his jail term told against him. He then went to South Africa where he practised as an electrician, a skill he learnt while with the German secret service. After a short time there he returned to Ireland and worked in the Shannon Industrial estate. He left that and returned to his home town of Kilkee where he worked as an electrician (he electrically wired the newly built Atlantic Hotel) as well as opening an electrical appliances shop. Again Jack couldn’t stay still even in his home place so he upped sticks and went to London where he was injured in a road accident and subsequently died form these injuries in 1971 and was buried in Glasnevin Cemetery in Dublin.

Jack O’Reilly’s private life was as chaotic and unfortunate as his public one. He married his wife Helen in 1945 after he was released from prison and they had six children. Helen’s body was found in April 1956 outside the abortion clinic of Nurse Cadden. Cadden was subsequently tried, found guilty of murder and sentenced to death. This was transmuted to a prison life sentence. She died a few years later in Dundrum Mental Hospital. Jack O’Reilly later married, Irene, a girl from Kilkee, and they had one son.