You are here: HomenextPlacesnextOuting to Kilkee leads to Tarbert Drowning Disaster 15th December 1893. 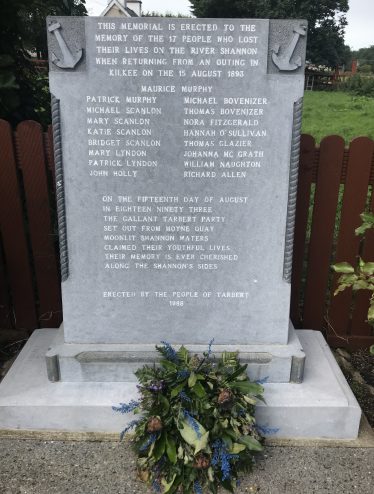 On the 15th August 1893 seventeen people were drowned in the River Shannon crossing from Moyne Quay in Kilrush to Saleen Quay on Tarbert Island. The 15th August was the Feast day of the Assumption and was a holiday and a Holy day of obligation  at the end of the harvest season and also at this time marked the end of the Summer Holiday Season in Ireland.. At the end of the 19th century the new West Clare Railway offered an additional attraction for young workers planning a day off and a day’s fun. Kilkee was the hub of holiday fun in West Clare in those times as it is today !

After most attended mass the party of young people from Tarbert -10 men and 7 women with an average age of 24 -decided to spend the days holiday in Kilkee. It was a beautiful fine morning, and planned to cross the River Shannon in two boats sailing from Tarbert to Kilrush ,get on the West Clare Railway from Kilrush to Kilkee and to return later that evening on the same three-mile journey.

However ,when they arrived at their point of embarkation at Coolnanoonagh there was no second boat for the crossing. There and then,the 17 day-trippers decided to crowd into Maurice Murphy,s 17 foot long fishing boat who was helped by his son, Patrick Murphy. As they were going across the boat began to leak but the passengers had two fidles and a concertina and did not notice the water.When they arrived at Moyne Quay in County Clare ,some of the women expressed concern that the hems of their skirts were getting wet ,while some of the men described bailing out water with their boots. Theses adverse conditions did not teach them a lesson.

The group went onward to Kilkee by train and by all accounts had good day and in the evening they all went home in the same boat with the exception of one man who came in a steamer to Tarbert Island. Some of the passengers were not happy to travel however there was two teachers among them who wished to return the same night. They appeared to have crossed the Tarbert Race ,a strong choppy bit of current and were 300 yards from Ardmore Point on the homeward journey and darkness was falling when disaster struck.It is thought the boat sprang a leak ,and overturned. Some suspect that a quarrel may have arisen or they may have stood up in the boat looking out for their landing place ,and this may have caused the boat to overturn. However ,the leak was the more likely cause ,because most of the victims ,when found wore only one shoe. They were trying to bale the seawater with the other shoe.

By the end of September only 12 of the bodies were recovered and buried in family graves.But five bodies were never recovered -the River Shannon remains their grave.The Scanlon family of Kilpadogue suffered the greatest loss with the death of four of the eldest in a family of 14.Two inquests later found that the boat was overcrowded and not in a seaworthy condition. A memorial was erected in Tarbert in 1988 and there is annual commemorations every year at the Memorial Plasa in Tarbert on the 15th August which includes song, poetry and prayer. Indeed to this day the people of Tarbert do not venture out on to the Shannon or swim on the 15th August. 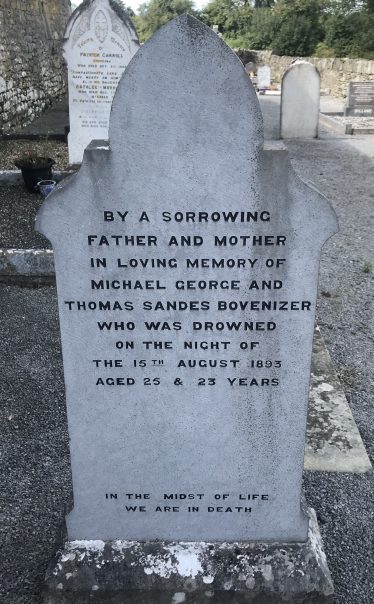 A poem was written by by a man called Bovenizer to commemorate the disaster  ,probably a relative of the two Bovenizer s who died that day.