You are here: HomenextTopicsnextFooagh Races 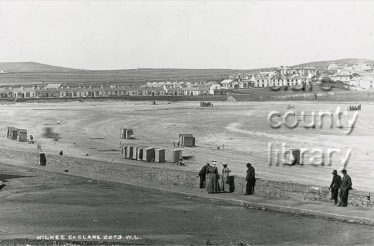 This nostalgic visit to the once famous Kilkee race course was made possible by the instant recall of Fooagh’s oldest resident, Timmy Carmody who gave  a detailed account of the races as told to him by his father and grandfather.

“The Fooagh race meeting was one of the most popular racing events in the West of Ireland.  Big prize money and a Gold Cup was its attraction and was known locally as the ‘Landlord Races’.It had a short and long course which ran from Nolans track field all the way up to Gull Island.

Con Griffins grandfathers’ house was on the side of the Dunlicky road and the only obstacle in the landlord’s way when he set out the course so the landlord ordered him to move his house to its present location without any compensation.

The landlord who lived at the site of the old ‘Hydro Hotel’ in Kilkee collected a levy from his tenants and business men in Kilkee to fund the races.  As he got old and feeble his agents looked after this and monies of course did not always find their way to the race fund and the landlord had to pay the winnings with borrowed money and the ‘Gold Cup’ was used as collateral for the bank.

Nolans track field was where the horses and jockeys prepared for the races and temporary stables were erected for the days involved.  All the race horses travelled by road therefore all local race meeting e.g. Ennis, Kilrush, Kilbaha happened during the same time of year. A big disagreement once occurred when the horse of the landlord from Carrigaholt ‘May Morning’ was beaten by ‘old screw’, a horse belonging to a poor man from Kilkee bog.  The poor man asked the priest for advice before the race and Fr told him to change the jockey and he blessed the horse.

The landlord objected and the prize money was withheld, the course was invaded and the police were called to restore order.

Timmy’s grandfather described Bolands big field being full of hawkers, swinging boats and wheel of fortune during the race days.  One night during the races a storm blew up and the stalls were blown over and locals were out early to collect all the trinkets from the drains.

Early in the 1800s there was prosperity within the British Empire so the demand for horses and men for the British army was very high.  The prize money reached a peak of £100 in Kilkee per race during this time. Following the collapse of the Napoleon conflict the economy collapsed and it was 120 years later before prize money hit £100 again.

Fooagh races were organised by the local landlord John McDonnell who lived on the site of the present Hydro complex in the West End of Kilkee.  The race course was on the left hand side of the present Dunlicky Road from Nolan’s track field to Bishops Island.  It had a short and long course, the parade ring was under ‘Look Out’ Cliff and today one can see the track of the horses still imprinted in the ground.

The present stone wall under look out cliff in cased the parade ring and across the road the Bookies had their pitch.  A timber stand of 60 ft long and 12 seats high was erected beside the bookies (which would currently be Tom Bolands big field) to seat the upper class people who attended the races.

Racing was viewed at the top of ‘Look out’ Cliff and outside the stone wall on the left of Dunlicky road which was built to enclose the race course.  The present Nolans Track Field was where thee horses were stabled temporarily and jockeys schooled their horses.

Fooagh races was up and running and in 1854 after an objection to the Kilrush Races the Racing Board recognised Fooagh so it then brought it under the I.N.H.S. rules and from then was reported in the racing calendar with records showing races intermittently from 1854 to 1890.  In 1854 the Clare Steeple Chase was held in Foogagh and won by ‘Nabolish’ owned by Capt Callaghan of Church Road (next to the present Marine hotel).

The races were a two day event and huge prize money because of a small supply of race horses. Heats were run with 3 horses, the winner went on to the final and the losers entered another heat where prize money was on average 2 to 5 sovereigns per heat with 30, 20 and 10 sovereigns for the final.  Reports on the races were good and it became one of the most popular in the West of Ireland.  With flat races of one mile open to horse hunting with an established pack of fox and stag hounds. Reports of huge crowds and great racing of three to five miles over a beautiful and sporting country.

Kilkee strand races were also held on the same year as Foogagh and there is no hint of animosity found quite the contrary.  Three of the same men acted on both committee.

The following chart outlines the overlap of members:

The Galway Races were held one week before Fooagh and Tramore was held one week after so the race horses were walked from one venue to another, eg. Galway to Gort (1 day) Gort to Lissycasey (day 2) Lissycasey to Kilkee (day 3).  One horse has a reputation of walking 1800 miles and competing in 17 races in one season.

Dr. O’Reardan rode Little Daisy on the first day and came second in the Kilkee Handicap of 60 sovereigns but messed up thinking he had another round to run.  He was replaced on the second day by P. Lynch but Little Daisy was again second.The course was faulted for the three banks that were too high and straight thus causing a lot of mishaps in jumping.  Reports on the Racing Calendar of the Foogagh Meeting on the 7th and 8th October 1890 had a cautionary sentence which may well be the epitaph of Fooagh Race Course.

“The races went ahead despite the fact that a terrible tempest raged all through the night of the 6th and made match wood of the stand fixings and the race course was like the remains of a shipwreck”.  Thus backing up Timmy’s recount.

Despite the remote situation the difficulty of coaxing owners to travel long distances with their horses having to walk and no big centre of population to support a meeting, Foogagh races continued but not as popular.  The famine took its toile in small townlands and the population of Fooagh in this era was as follows:

The beginning of the end is due to two factors.  The rising power of the Irish Land League and the growing popularity of race going.  Local races were held in Mullagh, Carrigaholt, Lahinch, Doughmore, Miltown and Moyralla.  Even the names of individual races carried an Ant-British message, ‘The battering Ram at Work Stakes’, ‘The Barricading Plate’, ‘The Irresistible Plan Stakes’, this led to attempts of a boycott of some races.

Standing at the top of Look Out Cliff, one realises a dream of horses parading in the ring inside the old stone wall and going on to gallop the big fields an jump the fences to the delight of landlords and peasants alike.  These people were still under British rule and were about to face the greatest catastrophe the Irish has ever known, The Great Famine resulting in our population reduced from ten million to less than three due to starvation, death and emigration.