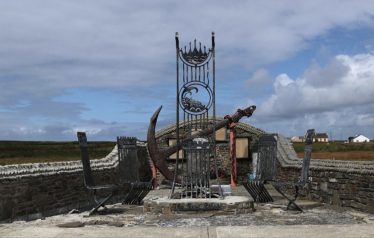 There is at Kilbaha ,a huge anchor ,which is a memorial to a ship called the Morven which was shipwrecked on the cliffs near Kilbaha on the 2nd of December 1906. The anchor is from the Morvin wreck.The Morven was a 2,000 ton, four masted ,barque cargo ship. The ship was wrecked on the cliffs of a small promontory called Horse Island which is located on the south coast between Kilbaha and Loop Head Lighthouse.

The ship was bound from Portland,Oregon to Liverpool with a cargo of 3,000 tons of grain and had taken 160 days to reach the mouth of the Shannon. On that December afternoon the wind blew from the west and to get out to sea to continue their journey they needed to tack. On making a tack in the direction of Horse Island the wind changed direction and the ship was unable to put about. Within a short time the ships bow was up on the rocks within a few yards of the cliffs and her bottom was torn away.

No lives were lost at this stage and  Captain Reese ordered the lowering of a live boat and the Captains wife and 9 sailors went aboard and headed for Kilbaha harbour. They arrived at the pier in Kilbaha after 3 hours and raised the alarm. Meanwhile the remaining 15 crew and Captain were able to escape by attaching a rope to the stern and they swung down the rope  into the water one by one and after a short swim reached and climbed the cliff. The captain had to be forceable removed. The party from the boat meet the ones who climbed the cliffs in the early morning. Each was sure the other was lost. Great joy was had by all as a shipwreck in those days of sailing with no loss of life was a miracle.